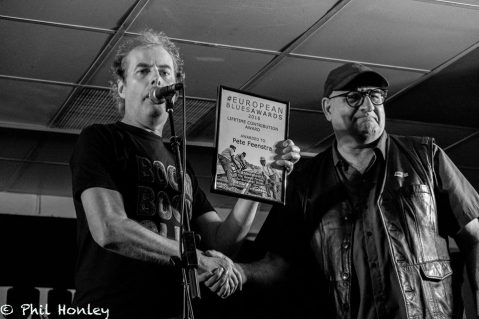 On Thursday 26th October Pete Feenstra received his 2016 European Blues Lifetime Contribution Award. The award was presented at the Beaverwood Blues Club in Chislehurst London by UK events coordinator Bluesman Mike Francis on a European tour date for Carvin Jones Band at the venue. Pete has been instrumental in promoting and playing blues music on the UK scene for many years and is a very worthy recipient of the award.

The award presentation is one of four happening before the public vote begins for European Blues Awards 2017 on Saturday 4th November. Beth Hart is to receive her Best Album Award for 2016 release Fire on the Floor during her European tour three days earlier on Wednesday 1st. Thank again to all the tens of thousands who voted to make this all work and get ready to do it all again very soon.