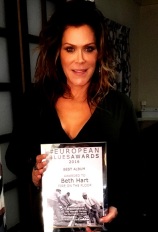 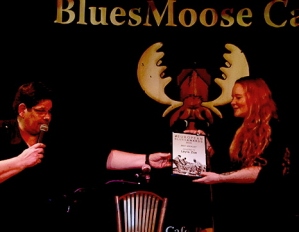 Last action of this European Blues Awards season has been to present the final awards to winners from 2016. Both Beth Hart (USA) and Layla Zoe (Can) were in Europe on 1st November and received their awards. Beth was presented hers for Best Album 2016 with Fire on the Floor before taking the stage at Forum Bath UK and Layla is seen being given hers by Rob van Elst of Blues Moose Café in the Netherlands (photo courtesy Joachim Brookes, Rock Times). Paul Jones BBC Radio 2 (UK) for Best Radio Show and Julian Sas (NL) for Best Musician (performance) will also be receiving theirs.

Please get ready for this years vote to commence late Saturday 4th November. The voting will end exactly a week later and winners will be announced on Sunday 26th November at Manchester Blues Festival UK who have kindly stepped in at last minute to do it following cancellation of this due to technical reasons at Lucerne. There will also be a European Blues Awards results special #BluesHour via twitter on Monday 27th November.