Following partial abandonment of the 2021 European Blues Awards, last weekend a multi location European zoom meeting was held to discuss possibilities for returning the nomination and voting process for this coming October 2022. It was concluded that due to the fact it is now almost 3 months into qualifying period for the awards and that in many countries there seems to be little easing of restrictions or return to touring and bigger public events, it has regretfully been decided to again suspend the main public vote awards process.

Since the beginning there has been a great reliance on touring where artists from all over the world perform throughout Europe. Unfortunately for the main this has been severely disrupted over the last 2 years therefore fair assessment and reflection cannot easily be made. Also many large festivals and annual events have not taken place further limiting the live music scene the awards have come to rely on so much.

As with 2021 it is hoped that later in the year some kind of recorded material feature can take place using the weekly online worldwide forum #BluesHour on twitter. Although not an ideal arrangement by any means it will enable some kind of promotional vehicle to carry on while hopefully everything gets back to where things were before the global outbreak of Coronavirus. Please follow the @BluesHour account where further announcements will be made accordingly. Please continue to support the venues and artists that have been so badly effected in these uncertain times.

Here are a series of brand new album releases that were featured on the weekly Blues forum by followers of #BluesHour. The feature ran April to October with final session on 18th October 2021. A broad spectrum of styles from all over the Globe were proposed and is always interesting to find out what everyone is listening to. They are listed in no particular order or ranking, purely how cover images saved. Big thank you to all who took part and make the forum work.

With no clear indication as to when live events may return to our stages and much of Europe still under lockdown, the inevitable decision has been made to again suspend 40th European Blues Awards full public voting process for the second year running. The better news is that in association with weekly online Blues forum using hashtag #BluesHour (through @BluesHour on twitter) there will be a new public focus for Blues and all genre related album material released and available from beginning of April 2021.

This will begin on Monday 19th April and continue every 3rd Monday until 18th October, the usual time for the actual full awards process to take place. Although not the ideal it gives everyone the chance to showcase their latest material and independent performers, reviewers and labels the chance to share important music that without ability to take the stage due to Corona virus, may otherwise obtain less exposure. That will provide at least 7 full months of open opportunity and benefit during current period. For purposes of the #BluesHour new album release focus and nomination, normal European performance rule during qualifying year will not apply for obvious reasons of travel and mobility at this time.

Reviewers, publications labels and of course artists are invited to submit latest material and recommendation for consideration by followers and blues fans worldwide between Monday 19th April and Monday 18th October. Material from European Blues Awards ‘Hall of Fame‘ members will also be made eligible at this time.

Any breaches of social media and conduct rules instantly and permanently invalidate any participant’s involvement in the process. The European Blues Awards are by charter conducted without sponsorship or association with publications, labels, promoters, venues, events or reviewers. Voting for certain categories such as Lifetime Contribution may be considered for public ballot in October depending on situation at that time. More information to follow at a later date.

Not ideal, but regretfully once again in these unique circumstances, all that can be done at this time. It is unfortunately the 2nd year of disruption, but without live events and to preserve integrity of biggest, longest running independent genre accolade outside the USA, was the right and only path to take.

To once and for all end confusion and prevent any further misinformation or misconception;

The European Blues Awards originally evolved from of a group of services Jazz and Blues enthusiasts and has never been run by venues, bands, events, manufacturers or an industry collective. By charter the awards do not and cannot collect and sell data, accept sponsorship or charge membership and registration fees (as incorrectly stated in a 2019 third party media feed). In recent times (during normal pre Covid19 pandemic circumstances) annual winners are purely decided by a massive free and secure, open online vote. Since the 1980’s in Europe alone there have been at least 20 other Blues organisations and awards schemes all offering their own unique styles and benefits. These include;

The European Blues Awards have no connection to any of the above, aside from possible former team member involvement.

Much as yet undecided, but given uncertain pandemic situation worldwide suspect a full awards process could prove difficult. However, currently looking at rolling out something based on recordings/live stream events this year, having already proved successful on weekly @BluesHour (#BluesHour tagged) Twitter forums since April 2020 (See below). More updates coming soon and follow online forum 21.00 CET/20.00 GMT/ 15.00 EST every Music Monday.

Sadly and not for the first time have to clarify and identify the real European Blues Awards. Probably best way to do this is to once again reinforce that the EBA never asks for contact details for data base use or any form of participation fee or membership payments. If this is taking place it is nothing to do with the real awards process that by charter has been run on an independent non-commercial basis from the start.

This is the only official European Blues Awards website (dot net) and if anyone comes across any irregularities by all means report publicly on the world’s weekly online Blues Music Forum by using #BluesHour tag on twitter from 21.00 CET/20.00 GMT/15.00 EST every Monday.

Coming up on twitter World Blues Forum #BluesHour Monday 29 June 2020 there will be another Lockdown Live Stream and Video Event. European Blues Awards acts Susan Santos and Bex Marshall will perform from 21.00 CET/20.00 GMT/15.00 EST. In line with the forum and awards charter these shows will be free to view by just following the #BluesHour hashtag and @BluesHour twitter account at that time.

The previous 2 have been a massive success and have plans to run more. If you’re interested in taking part please do not email but message through the twitter account at this time. The European Blues Awards have never collected or used data base information for commercial gain, remaining fully independent from sponsorship and solely choice of biggest open public genre accolade vote outside USA.             EBA Team 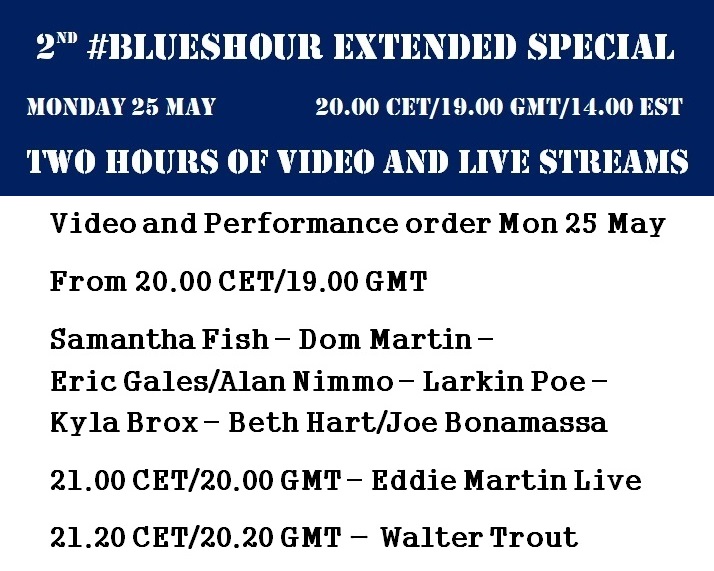 European Blues Awards Presentations have now been made for 2019 Winners

Despite worldwide Covid19 crisis European Blues Awards certificates have been circulated for winners of 2019 process as Spring Presentation Live Events were all cancelled. Also have another virtual live stream during an extended #BluesHour twitter forum  Monday 25 May from 20.00 CET/19.00 GMT/14.00 EST. Regretfully 2020 vote has been cancelled due to so many categories being decided by live performance and events. Congratulations to all winners of the biggest and longest running independent genre accolade public vote outside the USA.

It is with regret that the decision has been taken to cancel European Blues Awards 2020. As much is dependent on live performance within Europe, due to unfortunate current circumstances there was little option than to call off the 2020 awards process. As already reported there will be no 2019 presentation events and alternatives are being considered. More information and updates coming soon.

On a more positive note the weekly social media Blues forum #BluesHour will be circulating live performance streams and links as well as archive live videos posted using the hashtag on twitter Mondays from 21.00 CET/20.00 GMT/15.00 EST. As the European Blues Awards are by charter a non commercial venture there will be no charge for taking part and access is open to all. Thanking you for all your support in keeping the Blues alive at this time. Please stay safe and join in every Monday.

Regretfully due to recent circumstances in Europe it will not be possible to hold the usual presentation events for European Blues Awards Winners 2019. It is hoped that another method will be adopted and presently looking into alternatives. More information to follow soon.

At this challenging time would like to invite everyone to post or stream live material and videos using the hashtag #BluesHour to be viewed and circulated worldwide by the @BluesHour forum’s twitter followers. This will provide at least one way to launch new material and provide an audience that sadly may not presently be able to attend live performance venues. There is no cost to post on the forum and is open to everyone on Mondays from 21.00 CET/20.00 GMT/15.00 EST.

Lifetime Contribution and Hall of Fame update for 2019 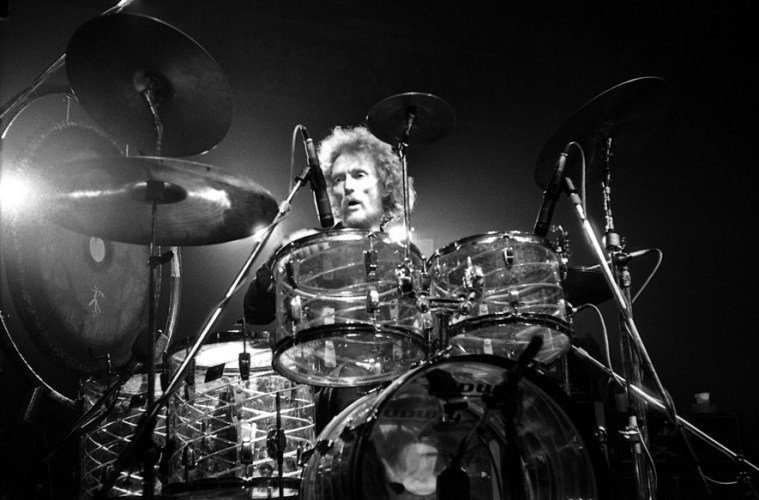 The 2019 European Blues Lifetime Contribution Award has been announced as the late Ginger Baker. His influence and inspiration on the European Blues Scene has been tremendous and he will be sadly missed by all. There are also two additions to the Hall of Fame with Blues Matters Magazine and Joe Bonamassa winning their third awards in the digital vote era.

Over recent times there have been a number of newer genre accolades emerging and this has led to a degree of confusion and misunderstanding. The team would like to take this opportunity to explain that the European Blues Awards have at no time collected or used data base information in any way. The process is conducted without any form of commercial gain or sponsorship and remains independent by charter.